Southwest Health System is rich in history. Here are some of the highlights from 1914 when the facility first opened to the present.

Dr. Emil E. Johnson converted two cottages into a hospital on the site that is now occupied by the Best Western Turquoise Inn on Main Street in Cortez. Dr. Johnson’s family lived on the premises where he had an office and an eight bed hospital. His wife was a nurse and an anesthetist. In 1940, Dr. Johnson had a stroke and the hospital was closed for about five months. Dr. Girod re-opened the hospital and operated it until he was called to active duty in January of 1942.

Dr. Johnson returned to Cortez and, with the help of the County Commissioners, kept the hospital open during the war. Dr. Speck, Dr. Calkins and Dr. Lilla worked in the hospital during the war. In 1945 the citizens of Montezuma and Dolores Counties recognized that the current facility would not serve the future needs of the two counties. The Lions Club took on the project of raising money to build a new hospital. The drive had great community support, and by 1948 enough money had been raised to build a hospital on South Broadway, currently the Johnson Building. 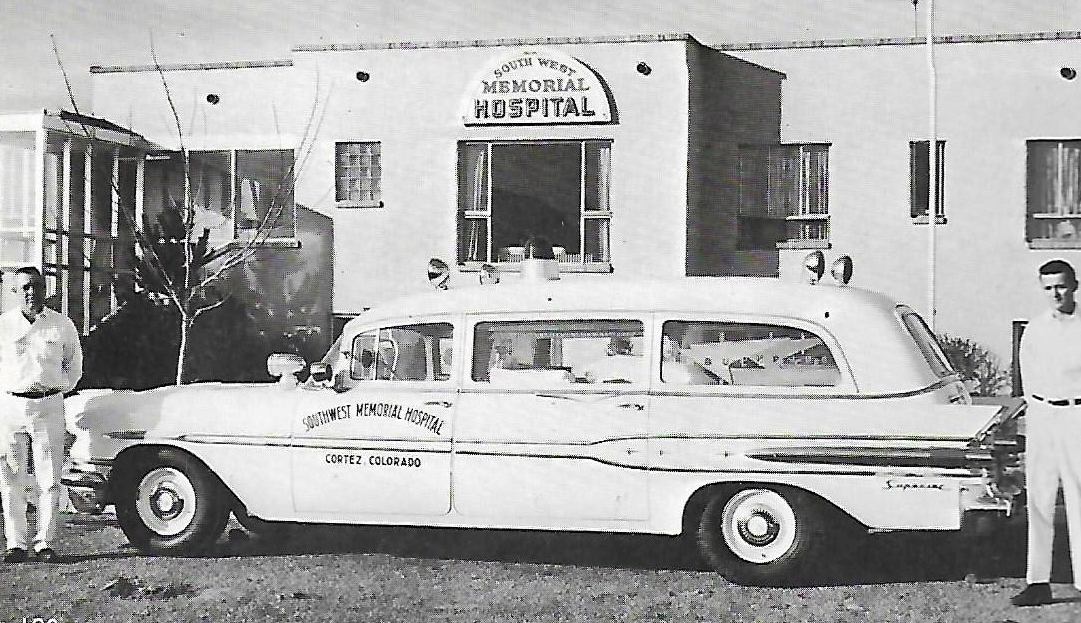 The new facility, Southwest Memorial Hospital, opened in May 1948 and was dedicated as a memorial to the veterans of Montezuma and Dolores Counties who were killed in World War II. The original plaque with the names of these men is located just inside the main entrance of the current hospital.

At that time the hospital had no official corporate structure. It was not-for-profit and non-governmental. A governing board was elected. Only those who had donated to the building fund were eligible to vote.

The hospital grew and by 1977 it became obvious that the community had outgrown the facility; a new structure was needed. A system was also needed to provide funds during times when expenses exceeded revenue and for the acquisition of expensive modern medical equipment needed to serve the community.

Through the Hill-Burton Act, the Federal government provided funds for construction of hospitals that would assume the responsibility of caring for patients without financial resources. A group of local citizens and the hospital board arranged to obtain funding through this program for construction of a new hospital adjacent to the Vista Grande Nursing Home. The land had previously been donated to Southwest Memorial Hospital by the Carpenter family.

In the mid-1990s, the County Commissions approved a petition from concerned citizens to establish a special district to provide tax money for operation of the hospital. The Montezuma County Hospital District was formed.

Shortly thereafter, the Southwest Health System board was formed which allowed the hospital more flexibility to enter into partnerships and access grant funding unavailable under a district board.

Around the turn of the century, the previously dormant hospital foundation was reestablished. In collaboration with both boards, the foundation was instrumental in securing new ambulances for the hospital, purchasing physical therapy equipment, and funding a variety of community education and physician appreciation activities.

The first decade of the 2000s was a time of upgrades and remodeling in several areas of the hospital including the emergency department, main lobby and registration area, and same-day surgery. New services added to the hospital during this time included wound care and an infusion center.

The period between 2008 and 2011 was an active one. They converted the South Campus building into several out-patient departments and administrative offices. The hospital also opened a sleep studies department, a rural health clinic, and a walk-in care clinic, launched a hospitalist program, began implementation of a community-wide electronic medical record system, and purchased a state-of-the-art 64-slice CT scanner with support from the District board.